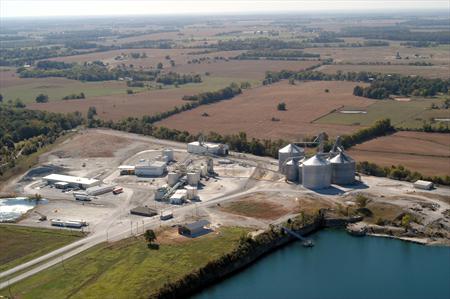 In just a little longer than one full day, Trident Automation installed a new operating system for Commonwealth Agri-Energy. The unprecedented speed was due to advanced planning and help from a simulation program.

The firm wanted to increase ethanol production, which meant replacing its APACS system with Siemens PCS 7. The upgrade would allow Commonwealth to take advantage of upgraded HMI and more advanced controls, sequencing and model predictive control systems, along Trident’s value adds such as trend object.   But the plant’s management team wanted to minimize downtime and gave Trident the assignment of rapid installation.

Jeff Meneau is one of Trident Automation’s PCS 7 certified engineers and was the lead engineer on the project. He credits the speed of installation to pre-planning, innovative wiring solutions, software simulation, and a lot of caffeine.

Trident teams used the Siemens SIMIT simulation software to create a virtual environment of Commonwealth’s process system. Meneau and his team were able to create all the I/O and use a virtual controller to simulate plant operations. The simulation ran a yeast propagation sequence and a fermenter filling sequence as well as talking to dependent sequences in the process—all as if the plant were actually operating. “By running these sequences in a virtual environment, we were able to simulate flow, valve and pump operations, and test the system without ever leaving Trident’s offices,” Meneau said.

When Meneau and his team went to Commonwealth for a kick off meeting, they were able to access the simulation over a secure internet connection and train plant operators on the new system before it was installed. “We set up an operator training station so the new system wouldn’t be such an adjustment once it was installed,” Meneau said.

Commonwealth plant managers said it was just like test-driving a car. “I’m absolutely sure that being able to hit the ground running was a plus,” said Commonwealth Plant Manager Ken Wirtz. “It sped up the learning curve before we had the system live and we could see the functionality of the system without having the plant running,” he said.

Trident teams also did a pre-labeling visit to Commonwealth prior to installation. The purpose of the trip was to label all analog wires that had to be moved to new locations–about 380 pairs of wires that had to be unwired and rewired to their new points as quickly as possible. The discrete points were easier thanks to Trident’s customized cabling system which is a migration cable with proprietary wiring schematics and customized connection points that allows them to use the existing terminations to be connected directly to the PCS 7 I/O cards.

“Most of our time on site is invested in wiring,” Meneau said, “so we were able to complete this upgrade in 36 hours thanks to the cable solution.”

The final ingredient was a commitment to working around the clock to get the job done. Trident worked two 12-hour shifts to complete installation as quickly as possible. “We started at 9 am on a Tuesday and by noon on Wednesday, the controllers and HMI were up and running, we just needed to actually test moving valves to complete the installation,” Meneau said.

According to Wirtz, he typically would expect a degree of push-back from plant operators during and after installing a new control system, but in this case the pre-planning and system simulation prevented that. For more information on using SIMIT simulation software in your next upgrade, please contact Trident Automation by calling 920-759-7477 or email [email protected].